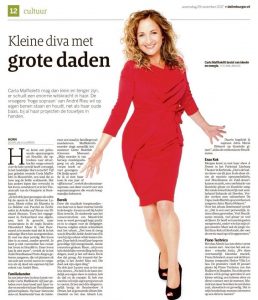 A little diva with great deeds.Carla Maffioletti may be small and petite, but there is enormous will power in her. The former “high soprano” of André Rieu wants to stand on her own two feet and, like her former boss, keeps tight reins in all her projects.How does an acclaimed opera singer from Brazil, who has given performances for sold-out mega arenas around the world, wind up in rural Horn? Five years ago Carla Maffioletti lived in Maastricht, a city that back then she declared to love. Life can turn out different than expected she declared in the “Theater cafe of the Orangery” in Roermond (City in the north of Limburg).“For three years I sang as a soloist in the Swiss opera of Lucerne. Nice roles as Musetta in La Bohème by Puccini and as Zerbinetta in Ariadne from Naxos by Richard Strauss. When my commitment in Switzerland was finished, I looked for a place to live in the area of Cologne-Düsseldorf. But I found Roermond to be such a beautiful town that I settled in neighboring Horn. Life is so beautiful here, no violence. You cannot imagine how hard life in Brazil is. I would not be able to live there,” tells the  South Brazilian singer born in Porto Alegre, who is full of plans to collect just as much success as she did as a soprano with the orchestra of André Rieu.Family ties.In an interview with this newspaper five years ago, Carla Maffioletti spoke about the bond with her father and mother in her Brazilian place of birth. With her newest solo CD, “Sentimental” the listener can share a sample of her family unity. Maffioletti’s mother in fact sings the piece “Gente Humilde” (Plain folks). “Professionally my mother is a music pedagogue, and sang a lot as a young woman. I sang this song with her when I was about fifteen,” says the coloratura soprano, a fancy word for a soprano who commands vocal delights.Range.Through her musical feat of strength – and one of them is her ability to achieve very high notes – she ended up with André Rieu. She was studying at the conservatory of Maastricht when she was asked to sing high noted pieces for the “stand alone” violinist. After that a few odd jobs with the orchestra followed. “Right after I returned to Brazil, André called me and asked if I would like a permanent position as singer in his orchestra. For twelve years I have had a wonderful time there, performing great concerts. But…… if you have a very clear idea of things, you have to do those yourselves. And I enjoy doing that. If anyone can understand that, than that is André Rieu.  He also does his own thing.”After three years in Lucerne, she was ready for something new. “Now I finally have the chance, the time and energy to do my own show”. I have an immense desire to complete my own projects. I am busy with three project at the same time: the theater show “A Dream,”  the previously mentioned CD “Sentimental,” and the duo “Almeh Luz.” There, I accompany soprano Jutta Maria Böhnert with the classical guitar,” so says the enthusiastic Brazilian. Enzo Kok.Tomorrow, she and her show “A Dream”, will perform in the Park City Limburg Theatre in Kerkrade.  “That will be the last show of this year. The show contains nice opera melodies, lots of Brazilian and South American music, and a combination of classical guitar and song. The final is very colorful with the Samba band “Saltando” from Heerlen. In addition, the salon orchestra “Da Capo”. Ludo Mariën and his accordion and singer Jutta Maria Böhnert will also perform.”She speaks about her album “Sentimental”: “It has become a very personable and intimate album. Lots of Brazilian music, lots of guitar and many strings. A number of guests have also participated, including my own mother. but also the young violinist Enzo Kok from Heerlen who has been recorded on CD for the first time.Piano Technica.During  the final performance she places the duo “Almeh Luz”, and – how else could it be  – her friend Jutta together. We primarily do classical music; Franz Schubert, but also the Brazilian composer Heitor Villa-Lobos.  The premier will take place on January 19th at the “Piano Technica” of Jan Huijberts in Beegden. After all the huge shows I would like to perform in smaller settings, a more intimate atmosphere with direct contact with the people. Music reaches them better in a smaller setting, acoustic wise and with sensitivity. My message is to move people in a direct manner.